I'll be taking vitamins as I prepare for two book signings this Saturday, December 3.

8 a.m. - 1 p.m. Sequiota Elementary's Holiday Bazaar
Shop for jewelry, candles, Miche purses, holiday decor, and of course, books. Stop by my booth for free bookmarks and coloring pages and an autographed, personalized copy of WHAT DO YOU WANT TO BE?
(Location: On Ingram Mill south of Battlefield--behind Springfield 8 Theater)

I hope to see you at one of these events. Thanks. 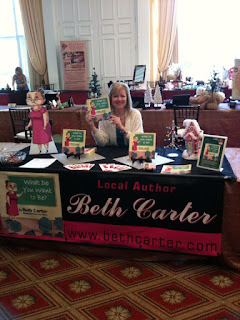 Whew. It has been awhile since I've posted. Let me explain.

My new children's picture book, IT ALL CHANGED IN AN INSTANT, was published this fall and I've had a book signing bonanza starting with the grand opening of the Well Fed Neighbor Market on October 1, followed by signings at the Ozark Creative Writers' Conference, Kickapoo High School's holiday show, FruityLand Yogurt and a holiday show at Hickory Hills Country Club. Tomorrow, I'll be at Baglady Boutique.

Some of these were hits and some were misses. I guess that's why writers need to schedule several signings. You never know who will attend and if they're in the market for your genre.

My book sales have ranged from one lonely sale to over 47 books sold in a few hours. At one signing I sold 9 books while I sold 26 books at another! The least I've sold--two books at one signing and only one last night. Hardly worth the trouble to set up and sit there for hours but you just never know. See the wide range? My average sales to date: 17 books per signing. Not bad.

But this really isn't about selling books. Not to me anyway. I've also attended three schools and five classrooms. The feedback from those has touched me immensely. That's why I'm doing this. I can't think of anything more important than children's literature. More about my adorable little fans in another post. I plan to visit several more schools in December.

How many book signings do you schedule for new releases? Were all of yours a success or were your sales similar to mine--hits and misses? Let me hear from you!
Posted by Beth at 1:33 PM 3 comments:

Email ThisBlogThis!Share to TwitterShare to FacebookShare to Pinterest
Labels: Book signings, children's books, What Do You Want To Be? Sales stats
Newer Posts Older Posts Home
Subscribe to: Posts (Atom)