It's Friday Fictioneer day which means writers from around the globe are writing 100-word flash fiction stories based on the same photo prompt. This week's photo convinced me to have a conversation between two Greek Gods. (Photo and art compliments of Claire Fuller.) 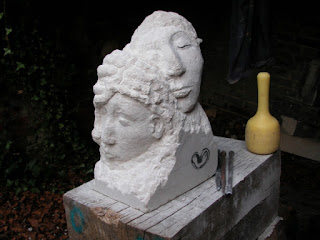 “What scent is that? Lilac? Honeysuckle? Rose?” He inhaled again.

Athena shook her long locks and cocked her head toward the yellow bottle.

“It’s a secret formula apparently made from Norwegian wildflowers. The shampoo is magical. That’s all I can tell you.”

“Zeus told me we’d be mere bedrock if—”

Apollo drew a small heart where he planned to etch their initials. Unable to resist, he again smelled Athena’s fragrant hair. They both turned to stone.