Ten Surprising Things About Me

I love getting to know other writers and readers so I thought I'd list ten random things about me from childhood to adulthood. I think you might be surprised! 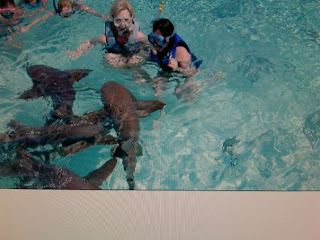 1.  I swam with sharks in the Bahamas. Really. I've got the pictures to prove it. See. (They feel like sandpaper, by the way.)


2. I'm a Leo through and through. I couldn't be MORE like a Leo, actually.

3. I've been mistaken twice for the actress who played Shelly (Ted Dansen's girlfriend) on Cheers--once in New York City and once in Oklahoma. I don't think I look a thing like her.

4. I've climbed the huge, world famous (and slippery) Dunn's River Falls in Jamaica three times. My daughter joined me on one of those trips.

5. I was extremely shy as a toddler. Non-speaking shy (even with relatives). As a young girl, I ran and hid when my aunt and uncle arrived, hit my head on the television and bled like a stuck pig. All because I was shy. I still have a scar on my forehead. 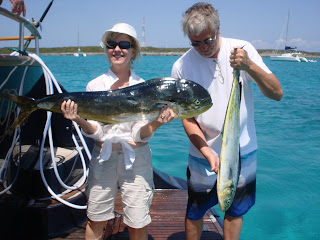 6. I love to deep-sea fish and have caught some whoppers--a 25-pound tuna in Florida and a 40-pound Mahi Mahi in the Bahamas (pictured here alongside hubby's, er, guppy. lol). Note: Everyone ate that fish but me. I just didn't have the heart.

7. I was a HUGE Elvis fan. Still am.  I used to kiss the television when he performed (and cry). I got to see him live in concert two months before he died. What a tragic death. I'm still sad about it. I've been to Graceland twice and even got to see the inside of his mansion.

8. I didn't know how to cook when I was married the first time. I remember calling Mom and asking how long to cook a ham or roast and whether it needed water or a lid on the pan!

9. I was a cheerleader in middle school. (I came out of my shyness then. Sink or swim, as they say.) I was also drum captain for the Kilties in high school. By the way, the Kiltie Drum & Bugle Corps is the oldest women's drum corps in the United States, a tradition I'm proud to keep alive. This photo is when we marched over the same bridge that Paul Revere galloped across to announce the British were coming in Concord, Mass. I'm the first drummer on the far left (probably blocked by the flag). My good friend, Jackie, is the majorette in the middle with the big black hat.

10. I was a single mom for 16 years. My daughter and I had a lot of fun (and stress as a single working mom) but mainly fun.

That's it. A bit in the life of Beth. I hope you enjoyed finding out random things about me. Now, it's your turn! Tell me some things I may not know about you.
Posted by Beth at 4:02 PM