In late March, I read to second graders at Greenwood. Their curious minds always delight me and remind me why I write children's books in addition to novels. I always leave schools with a smile on my face. 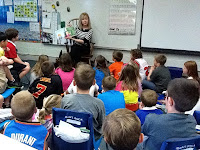 After I read my book, WHAT DO YOU WANT TO BE?, I asked the students what they wanted to be when they grew up. After all, I wrote this book to inspire children to dream big! One by one, they answered very specifically with careers such as professional tennis player to marine biologist to attorney. These were high achievers!

Then, I explained how to create a story starting with either a plot or a character. We decided our main characters would be a pig and a dog. The students named them Petunia (the pig) and Cookie (the dog). I talked about using the five senses when writing so the reader could really put themselves into the story--to show the story and not just tell it. I also talked about creating conflict to make the story interesting and a bit about pacing (i.e., removing the boring parts). When we talked about conflict, the students came up with some hilarious situations for the animals, and storylines took off in many directions. 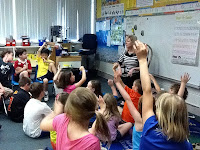 I suggested they each write their own ending since they had the "bones" of the story. I was delighted when a boy (toward the end of my talk after we had moved on) raised his hand with yet another suggestion about the pig and dog's dilemma. He was really thinking about his story--and HE was the one in the beginning who told me he didn't like to write! Success. 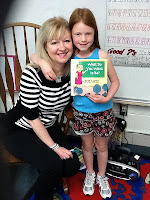 Toward the end, we danced to a theme song that I'll talk about in a future post. Finally, there was a short Q&A where the students had insightful questions such as: "How did it feel to become published?" and "How long did it take to write your book?" and "How did you work with the illustrator?" in addition to many more very grown-up questions.

It was a great day. Thanks to Cecily Cornelius-White and Avery White for inviting me--and for taking me to lunch afterward!
Posted by Beth at 3:47 PM

Email ThisBlogThis!Share to TwitterShare to FacebookShare to Pinterest
Labels: children's books, Children's literature, Schools, Students, What Do You Want To Be?, writing